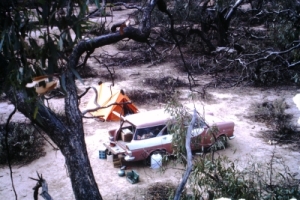 The FB Holden at our camp in Hay

When we moved to Melbourne, I had no car for a while but finally saved enough money for a deposit on an FB Holden station wagon, in classic pink and white. It was fitted with a tow-bar, which was to become a great asset to me in the future, saving my car from damage on several occasions. when cars running into the rear sustained front-end damage.

However, over several years the car sustained quite a bit of panel damage. First, a rear-ender bent the tail-gate panel. Then, while talking to a newly-acquired girl-friend while driving, I suddenly realized that all the traffic in front of me had stopped. I hit the brakes hard, and skidded sideways, the left-hand side of my car hitting the back of another car. I never went out with that girl again.

Let me preface the next section by saying that I and my friend are not proud of our actions during these years.

My friend Arno (now my brother-in-law) and I rather fancied ourselves as hunters. We both had single-shot .22 rifles (powerful enough to kill rabbits but not much else). We talked about going “up North” to shoot crocodiles and make money on the skins, but this never happened. We went up to Hay in New south Wales several times though, pig-hunting. We called it pig-hunting, but the only things we shot were rabbits and kangaroos. 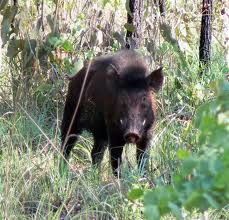 Actually that’s not true… we shot one pig. It was drinking at a dam and we crept close enough to get a shot. Arno fired, and either missed or hit it in a non-lethal area. It turned around, spotted us, and charged up the slope of the dam toward us. We both took off in panic. In desperation I stopped and took a shot – and it dropped down dead!

We were quite a way from the car and the pig was quite heavy, so we cut off one leg and took it back for cooking. It was tough as boot leather and about as tasty. From then on it was just kangaroos and rabbits that we hunted.

We had a pack-rack on the roof for a few trips to Hay, and usually while hunting, we took turns to ride on top as “spotter”. When the spotter saw a kangaroo, he’d wave one arm over the windscreen, and the driver would stop the car and we’d give chase on foot.

One day, I was driving and Arno signalled that he’d spotted a ‘roo. I hit the brakes, a bit too hard I think, and the pack-rack, with Arno still on it, slid down the windscreen, across the bonnet and into the sand in front of the car. The car fortunately stopped in time to avoid running over them. When Arno picked himself up out of the sand, we found his rifle had discharged during the incident.

The pack-rack scored two deep lines across the bonnet, and when we returned home, my mother enquired as to what had caused them. We told her a pig had attacked the car and gouged the bonnet.

One day,we were driving in the desert when we found we were almost out of petrol. We looked at the map and saw that we were close to a place called Freshwater, and decided to drive there to fill up. When we arrived we found it was not a town, but a homestead. But the owner had a large petrol tank in his shed, and kindly filled up our car from it, in return for us helping him fill the water troughs on the property (his team were all in town for the day).

While talking, he showed us his newest “toy” – a high-powered rifle with telescopic sights, that had just arrived from America. He then gave us a few tips about shooting kangaroos. One was, that if you want to use the skin later, you should shoot them in the hip, which breaks the spinal cord and leaves no blood on the skin. We were both secretly amused by this, as we considered it a “good shot” if we even hit the kangaroo, let alone choose a spot on the hip!

But then he gave us both a try-out with his rifle, and we were amazed to find that, given a firm support, when we looked through the sights at a clump of trees nearby, there were three kangaroos there that we hadn’t seen, and not only could we have shot them in the hip, we could have chosen any spot on the body! After some more pointers on how best to clean and treat skins, we returned to the hunt.

Upgrading after I was married.